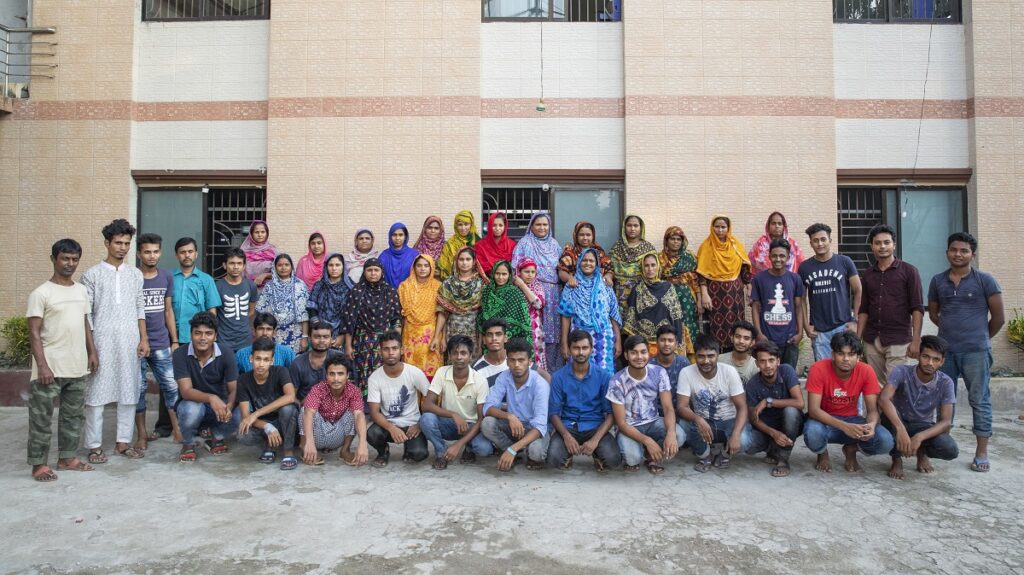 In Bengali, Oporajeo means ‘Invincible’. It was born out of the deadliest garment factory disaster in history. The disaster that led to Oporajeo’s formation occurred at the Rana Plaza building in a district of the capital, Dhaka. This eight-storey commercial building housed a number of garment factories making clothes for major Western brands. On the morning of 24 April 2013 it collapsed, killing 1,136 people. For 11 days, volunteers worked tirelessly to rescue those buried and recover the dead. In the weeks that followed, some of the volunteers set up a group called Mukto Tarunnno to raise funds for the rehabilitation of survivors. Looking to the future, the group realized that more could be done than simple charity. Their background in labour rights meant they understood the need to work in solidarity to help people rebuild their lives and this meant finding work for those who had lost their livelihoods. Two months after the collapse, on 24 June 2013, a new kind of factory was created. With the help of labour activists, Oporajeo was established by seven former Rana Plaza workers. Within 18 months, the factory had grown to 33 workers, the majority of them survivors from Rana Plaza. The workers of Oporajeo were labeled owners, and the profits that the factory made were distributed equally among them. Medical support for treatment of physical and mental rehabilitation that resulted from the disaster was established, and a local school was set up for the workers’ children.

Two years later, on the evening of 14 March 2015, a devastating fire ripped through the Oporajeo factory. It destroyed all the sewing machines and 19,000 bags. The main power switch was found to be off, so fire investigators determined that the origin of the blaze could not have been the electrical system, as is common in factory fires. They also found that the back door had been broken in, and fuel from the generator outside had been taken. It was clearly an act of arson.

RISING FROM THE ASHES: Like a phoenix emerging from the ashes, Oporajeo rose again. It is now stronger than ever. Many of the original workers have received compensation for the Rana Plaza disaster and have managed to leave factory work behind and move on to better things. Those that remained helped to relocate the factory to another neighborhood on the far side of Dhaka, 25 miles away from the shady figures suspected of the arson attack. Five years on from the fire, Oporajeo now comprises 280 workers and is well established as a specialist manufacturer of jute products.

Launched in 2013, Oporajeo has put up its strong position in the domestic and international markets within 7 years. Oporajeo has expanded business wings in the agriculture supply chain, renewable energy, diversified jute products, knit garments to edible goods. Kazi Monir Hossain continued looking after Oporajeo Family as Chief Executive Worker and Managing Director. Former Chairman of Oporajeo, Probir Kumar Sarkar has transferred his shares to the current Chairman Lutfor Rahman this year. Another company was registered in the name of Oporajeo Enterprise Limited for smooth business operations. Jute products of Oporajeo Limited is the flagship of the family ensuring the best quality. 240 workers are working in this company which is fully in line with social compliance. There are 300 temporary workers for jute handmade products too. Oporajeo has created jobs for 1,000 people since its beginning.
2018

Oporajeo was re-registered this year. Based on the previous experience, to avoid complications due to trust or non-profit registration, the re-registration was completed as a limited company. Prabir Kumar Sarkar with a 10% share became the Chairman and Kazi Monir Hossain with 90% share absorbed as the Managing Director of Oporajeo Limited. In the middle of the year, a manufacturing company named Oporajeo has been started its operation. At this time Lutfar Rahman joined as Director and General Manager.
2017

After a yearlong struggle, Oporajeo turned around and resumed its operation. After the formal closing of the Shongkolon Bangladesh Trust, Oporajeo shifted its business focus and involved in solving the food crisis of the hilly regions of Bangladesh. Oporajeo helped the indigenous community for producing high-yield crops, accessing to the big markets, and supplying fresh drinking water. This was begun through individual investment.
2016

The school ‘Shongkolon Pathshala’ has been phased out and Shongkolon Bangladesh was declared obsolete from the country.
2015

The Oporajeo factory was set on fire on 14 March 2015. All machines finished goods and stored materials were fully burnt. The reason for this incident remains undiscovered. However, the fire service found that one of the doors of the factory was broken. Thus, they concluded that somebody intentionally set fire on the factory. Oporajeo and Shongkolon Bangladesh stopped their operations after this incident. Only the school ‘Shongkolon Pathshala’ continued its operations with the financial assistance from Transcom, one of the largest business conglomerates of the country.
2014

Though Oporajeo started its operations since 24 June 2014 but the company was not registered in the first six months. The selection of the type of ownership of the company took some time. By the middle of the year, the company embraced the concept of ‘Worker's Ownership’. Trust was registered after that. Sami Al Islam (Chairman), Helena Islam (Vice-chairman; injured worker of Rana Plaza), Akku Chowdhury (Vice-chairman), Kazi Monir Hossain (Secretary), development worker Khushi Kabir (Treasurer ) and three other workers of former Rana Plaza were enlisted for 'Shongkolon Bangladesh Trust' to be operated as a trust. Oporajeo was taken as a project of the trust. To provide proper schooling of the children of the injured families “Shongkolon Pathshala”, a free school was established under the trust. Oporajeo faced a lot of difficulties in business operations as it was under a Trust. obtaining the local trade license, bank account, and import license got delayed due to the category of entitlement. Even with all barriers, Oporajeo managed to pay more salaries to the workers. Workers were also provided additional facilities. Oporajeo started dividing 50% of its profits among the workers.
2016

The deadly 2013 Dhaka garment factory collapse (the Rana Plaza collapse) was a structural failure that occurred on 24 April 2013 in the Savar Upazila of Dhaka District, Bangladesh, where an eight-story commercial building called Rana Plaza collapsed. The search for the dead ended on 13 May 2013 with a death toll of 1,136 and 2,400 severely injured. About 5,000 garment workers were employed there. When the building collapsed, the damage was massive and depressing. The rescue team operated for 11 days relentlessly. A voluntary rescue team was the first to reach with help in the collapsed area was led by Kazi Monir Hossain. There were two branches; one was rescuing the trapped workers and another team was collecting funds for the affected workers. Journalist Anis Raihan led the fundraising team. This voluntary rescue team was named “Mukto Tarunno”. Mukto Tarunno saved 29 lives in 11 days and rescued countless corpses. After the rescue operation, about BDT 104,000 was unspent in the fund. A worker assistance center was founded in Savar with this amount. This center made a detailed assessment list of dead, injured and lost workers from the collapse. The center also provided medical and food assistance. With the help of a private hospital, the team gave full medical assistance to 160 workers. An equivalent amount to daily necessity for one month was provided to 480 workers. Mukto Tarunno also borne education expenses of 20 students. Mukto Tarunno also provided necessary information to different organizations about the Rana Plaza Collapse and victims. With their help, different people and organizations came forward for rehabilitation of 86 workers. Sami Al Islam, retired Major Khaled Raihan, Bangladesh Mohilas Parishad leader Parvin Islam, Volunteer Organization, Amra’s member shayantani twisha, Anupam Dev, Worker leader KM Mintu and a lot of people joined Mukta Tarunno in these noble initiatives. Through the initiative of Mukto Tarunno, Oporajeo, a manufacturing company, was stemmed with only five sewing machines and seven workers. The primary focus of this factory was to provide rehabilitation of the injured workers of Rana Plaza collapse. 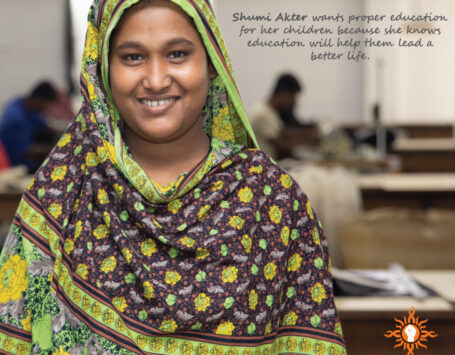 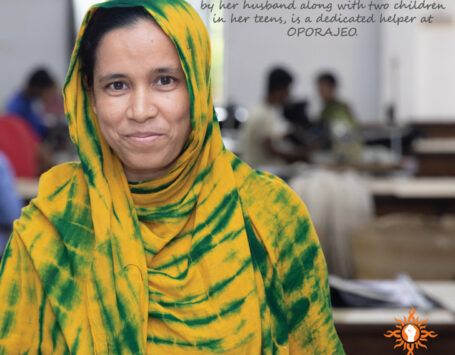 A helper who is left alone by her husband at an early age is trying to set her and her two children’s life with a new hope that someday her children will not face the struggle what she has already faced. 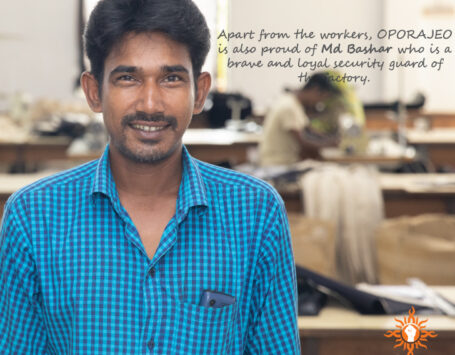